A post from Matt Walsh on Facebook deals with a serious issue. His style is pretty blunt, but his point is very valid. Not just for this meme, but for many others. We need to be careful of what we like in Facebook! 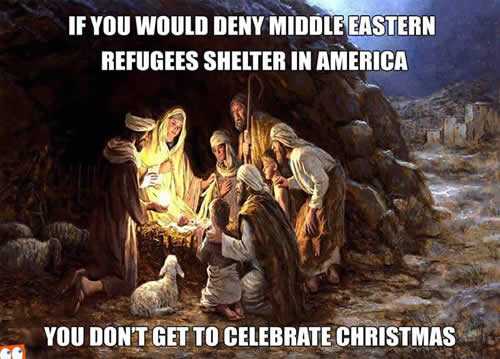 OK, one of my biggest pet peeves is when people just invent historical facts out of whole cloth and then publish them in the form of a snarky meme, allowing other historically illiterate nitwits to quickly spread the falsehood all over my newsfeed. I guess this isn't really a pet peeve so much as a universal peeve shared by all rational human beings.

That brings us to this meme, or ones like it, which you've probably seen a billion times this month. Chances are you'll see it a billion more times over the next week. It draws a parallel between modern Muslim refugees and the Holy Family at the time of Christ's birth. The Holy Family, according to the meme, were refugees, too. They were even turned away at the inn, just like Republicans want to turn Muslims away! How analogous!

Yes, it's very analogous except for the fact that it's completely wrong on every level. Mary and Joseph were not refugees. They came to Bethlehem for the census because that's where they were born. I've never heard of a refugee fleeing to his hometown for a census.

They were only turned away at the Inn because there wasn't any room. It wasn't because they belonged to a violent religious sect that had been perpetrating terrorist acts all over the globe, causing the innkeeper to be understandably concerned that they might be terrorists.

Now, sometime after Jesus was born, Mary and Joseph did flee to Egypt when they heard from the angel that Herod was going to slaughter all of the male babies in and around Bethlehem. If you want to call them "refugees" at THAT point, fine, but that has nothing to do with Christmas.

Even in the oldest Christian traditions with the longest Christmas seasons, the season still ends at the presentation in the temple, which is before they fled. I'm not aware of any church anywhere in the world that extends the Christmas season beyond that. So on no level at all does this analogy apply.

But, OK, because progressives who've never read a Bible and probably couldn't even name two of the Gospel writers have decided to bring this up, let's talk about it. Why did Mary and Joseph flee, exactly? Well, as I said, because there was going to be a wholesale slaughter of infants.

Hmmmm... I wonder where we can find something analogous to the systematic mass murder of babies? Oh, I have an idea: check your local Planned Parenthood. Mary and Joseph had to leave their hometown so that the Christ child would not be a victim of an ancient form of abortion.

If we're going to use the early life of Jesus to make an political points, then, I think the point is that you shouldn't kill babies because you may be killing Christ. In fact, you are killing Christ every time you kill a baby, because Christ resides in all children.

There's your meme, liberals. Have at it.