Saltshakers posted this blog post about the foundational effect of Christianity on western society. Used by permission and with appreciation.

The surprising link between Christianity and Western morality.

Another great blog post by Akos Balogh, who works with university students in NSW.

This time he writes about the Christian worldview and the way it underpins western society.

Akos writes, "Now sure, you’ll hear about the evil things that Christians have done throughout history"... I recalled that Senator Eric Abetz spoke of this, in his recent speech at our Dinner, saying that Christianity is increasingly spoken of as being the source of evil.

In his blog, Akos uses the example of a Professor of History who contrasted the pagan shame-and-honour cultures with the qualities evident in western nations, and revealed that his non-religious and atheistic students were actually very 'Christianised'. He quotes Tim Keller, who said, "Many of Sommerville’s most anti-religious students were surprised to learn just how deeply they had been influenced by ways of thinking and living that had grown out of biblical ideas and been passed on to them through complex social and cultural processes."

In the comments following Akos' article, one person recommended TWO books.
They are Vishal Mangalwadi’s book “The Book that Made Your World: How the Bible Created the Soul of Western Civilisation” (click here to buy it) and "How Christianity Changed the World" by Alvin J Schmidt. (Click here to buy it) We recommend both of these books or recommend them highly.

Interestingly, Senator Abetz commended BOTH of these books in his recent speech to our Dinner! Click here to read or listen to his speech.

You can read it on Akos' blog - click here.

A secular university isn’t a place you’ll hear unexpected truths about Christianity. Now sure, you’ll hear about the evil things that Christians have done throughout history. But such a roll-call of evil acts is not news – let alone a shock – to many Atheist students, who often consume a steady diet of Dawkins, Hitchens, and Harris.
But I heard about one class – on a secular campus –  where even Atheist students were shocked by what they learned: an unexpectedly positive truth about Christianity, that challenged their narrative.

The Borrowed Capital Of Western Morality

No, our morality didn’t all come from the Enlightenment.

Author Tim Keller gives the example of Professor of history C. John Sommerville, from the University of Florida, who did something interesting in his classes. Keller writes:

In his history classes, C. John Sommerville used to demonstrate to students how thoroughly Christianised they were, even those who were atheistic or antireligious. He would list the values of shame-and-honour cultures (like those of pagan northern Europe before the advent of Christian missionaries) and include values like pride, a strict ethic of revenge, the instilling of fear, the supreme importance of one’s reputation and name, and loyalty to one’s tribe.

(We should notes these aren’t just values belonging to pre-Christian Europe. Just look at much of the Middle East, Asia, and Africa.)

Then he would list corresponding Christian values, which had been hitherto unknown to the pagans of Europe – things like humility, forgiveness, peaceableness, and service to others, along with an equal respect for the dignity of all people made in God’s image.

Keller then brings it together:

Many of Sommerville’s most anti-religious students were surprised to learn just how deeply they had been influenced by ways of thinking and living that had grown out of biblical ideas and been passed on to them through complex social and cultural processes. His point was that much of what is good and unique about Western civilisation is actually “borrowed capital” from a Christian faith, even though the supernatural elements of the faith have been otherwise neglected of late in the public sphere.’ (CenterChurch, p214, Emphasis added).

What might happen if Christianity leaves the western building?

As far as I can tell, many of our secular elite would also be shocked by Sommerville’s class. Christianity hasn’t done much good for society, so the sooner we leave it behind, the better – seems to be the growing consensus.

But what might happen if / when Christianity leaves the western building?

Italian philosopher Marcello Pera (an agnostic), has this to say:

Without the Christian vision of the human person, our political life is doomed to become the mere exercise of power….our encounter with “the other” – the poor, the sick, the dying, the needy or outcast of any gender, race, or age – can only deteriorate into violence and manipulation, and our civilisation will cut itself off from the principles that first baptised and nurtured it.’ (Marcello Pera, Why We Should Call Ourselves Christian, p60)’

Strong words, and time will tell if he’s too pessimistic in his prediction.

But one thing’s for sure: a Christian ‘take’ on morality originated from a Christian view of reality. Without Christianity, we wouldn’t have western morality.

Here’s a classic Atheist internet meme that shows how Christianised western Atheists are (just look at the list of values they hold to). Interestingly, they don’t give any credit to Christianity for imbibing western culture with those values… 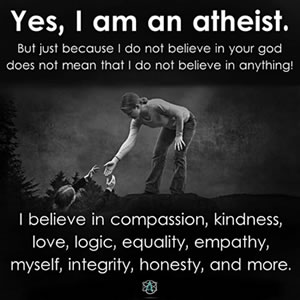